US Amb. Deborah L. Birx opened the 2019 90-90-90 Targets Update in Mexico City on July 21, 2019, with a discussion of efforts to link evidence-based policies and data with action in countries supported through the President’s Emergency Plan for AIDS Relief (PEPFAR). Dr. Birx stressed that political will, policies, data, and resources matter to achieve HIV epidemic control across all age bands, genders, and key populations.

The International Association of Providers of AIDS Care (IAPAC) hosted the satellite symposium ahead of the 10th IAS Conference on HIV Science (IAS 2019), in partnership with the Joint United Nations Programme on HIV/AIDS (UNAIDS) and the Global Network of People living with HIV (GNP+), to report on global, national, and local progress towards attaining the UNAIDS 90-90-90 targets.

Representatives from China, France, Mexico, and South Africa presented country-level estimates about progress in closing HIV testing, treatment, and viral suppression gaps in the context of the 90-90-90 targets. These targets seek to ensure that 90% of people living with HIV know their status, 90% of people who know they are HIV-positive are receiving antiretroviral therapy (ART), and 90% of those on ART achieve and maintain viral suppression. Achieving zero stigma is an additional but no less important UNAIDS target.

“Our aim during this year’s 90-90-90 Targets Update is to highlight successes achieved and challenges faced globally, nationally, and locally as communities affected by HIV worldwide strive to attain and surpass the 90-90-90 targets. We do so with the clear understanding that 90-90-90 is a starting point on a trajectory towards getting to zero new HIV infections and zero AIDS-related deaths,” said IAPAC President/CEO José M. Zuniga.

“Our challenge in France is to reduce entry into the [treatment] cascade and improve the first 90 overall,” said François Dabis, Director of ANRS, the French National Agency for Research on AIDS, during his presentation. Dr. Dabis added that one of the major challenges in France is to reduce the amount of time – an average of 3.3 years – between when a person becomes infected with HIV and when they learn their positive status. French officials estimate that they have reached 86-88-97 nationally as of 2016, with approximately 5,800 new HIV infections per year. 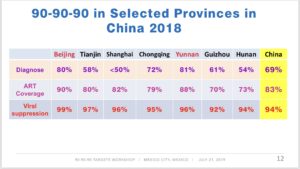 “It is very, very difficult to gauge the number of people living with HIV. That is still a global challenge,” said Zunyou Wu of the Chinese Center for Disease Control and Prevention. Dr. Wu’s presentation estimated that there were 148,589 new HIV infections in China in 2018. There was significant variation among various cities and regions within China, particularly with regards to HIV testing. Nationwide, an estimated 69% of people living with HIV know their status, but Beijing has reached 80%, whereas Shanghai remains below 50%. Dr. Wu said that getting people diagnosed is the biggest challenge for Chinese public health officials, who estimate that the country reached 69-83-94 on the UNAIDS targets in 2018.

“In terms of diagnosis we have managed to do well,” said Gloria Maimela, Director of Health Programs at South Africa’s Wits Reproductive Health and HIV Institute, but retaining people on antiretroviral treatment remains a key challenge. Dr. Maimela said during her presentation that is often difficult to locate people living with HIV and that better health data is badly needed. South Africa’s Department of Health has been working with PEPFAR and the U.S. Agency for International Development (USAID) to get 6.1 million people on ART by 2020. South African officials estimate that the country reached 84-74-55 on the UNAIDS 90-90-90 targets as of April 2019.

“It is clear that we need to keep fighting the HIV epidemic in Mexico,” said Alethse De la Torre Rosas of Mexico’s National Institute of HIV Prevention and Control (CENSIDA) during her presentation. Stronger prevention, early diagnosis, and the standardization of ART delivery are the main priorities for health officials in Mexico. These officials estimate that Mexico reached 79-72-55 in 2018, and that there are approximately 230,000 people living with HIV in Mexico.

City-level speakers at the 2019 90-90-90 Targets Update also reported data from Bangkok, London, Mexico City, and New York City. Florentino Badial Hernández, Director of the Clínica Condesa Iztapalapa in Mexico City, reported that although 14% of people tested positive for HIV in their facilities, that number rose to 37% for both transgender women and male sex workers in Mexico’s capital city. He also noted that antiretroviral drug resistance is a significant challenge for health workers.

Demetre Daskalakis, Deputy Commissioner for Disease Control at New York City’s Department of Health and Mental Hygiene, discussed his city’s “status neutral” approach to HIV treatment and prevention. The goal of the program is to ensure that people who are HIV-negative have access to preventative PrEP medicine, and that people living with HIV adhere to antiretroviral treatment so that they cannot transmit the virus to others. New York City reached 93-86-93 on the 90-90-90 targets in 2017.

Chulalongkorn University Professor Praphan Phanuphak reported that Bangkok reached 91-70-76 on the UNAIDS targets in 2017, compared to 98-70-83 nationwide for the Kingdom of Thailand. Dr. Phanuphak added that although same-day PrEP and same-day ART strategies have led to increasing the numbers of people on biomedical prevention and treatment, more work remains to identify people living with HIV who remain undiagnosed and link them to care, treatment, and support.

Tristan Barber, an HIV Specialist at the Royal Free Hospital, reported that London remains the most heavily HIV-affected city in the United Kingdom despite the city’s successes before and since joining the Fast-Track Cities initiative. He said that London’s public health leaders are continuing efforts to improve access to HIV services for key populations, including men who have sex with men, transgender individuals, and migrants, with a special emphasis on racial minorities. He further indicated that fighting stigma will also continue to be a priority. London, which reached 95-98-97 in 2017, is the host of the Fast-Track Cities 2019 conference taking place September 8-11, 2019.

In offering a series of what she termed “headlines,” Shannon Hader, UNAIDS Deputy Executive Director for Program, laid out the challenges still to be confronted to achieve universal progress towards the 90-90-90 targets on the eve of the 2020 milestone. Dr. Hader’s headlines included “unequal and uneven progress in stopping new HIV infections and AIDS-related deaths, large disparities between young women and young men in reducing new HIV infections, and the fact that more than 50% of new HIV infections are occurring among key populations and their sexual partners.”