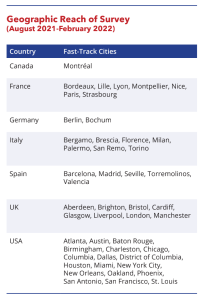 The COVID-19 pandemic has had a significant impact on the continuity of HIV services in every country of the world and, by extension, cities and municipalities where large populations of people living with and affected by HIV reside. There are also HIV policy dimensions related to the COVID-19 pandemic, including sustained political commitment for and continued funding to advance HIV responses. 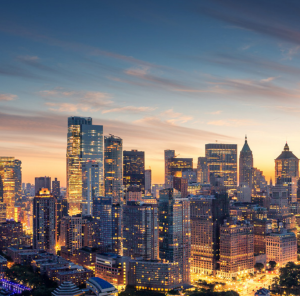 Urban HIV responses include the full breadth of services related to HIV prevention, testing, care, and treatment. The COVID-19 pandemic may have affected local HIV responses in many ways, including positive or negative effects on HIV financing, HIV and broader healthcare service access, movement of staff between COVID-19 and HIV responses, and changes to the underlying socioeconomic conditions that contribute to the HIV epidemic as risk or protective factors. 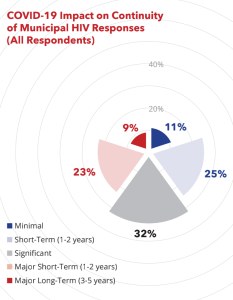 HIV financing comes from a variety of sources, including city or municipal, subnational, and national governments. For many reasons (including its unique history, the stigma associated with HIV, and the importance of testing and prevention), HIV responses tend to be more reliant on direct government and nongovernmental organization funding than do responses to most other health conditions, which are generally funded more fully through insurance and patient payments. With the outbreak of the COVID-19 pandemic, governments at all levels spent heavily to implement COVID-19 testing, treatment, and vaccination services, as well as to provide social support, including assistance with employment and housing as economies ground to a halt. Public health expenditures on COVID-19 responses coupled with a decline in local economies and therefore a decline in city or municipal revenues, put urban HIV responses at risk of facing declines in public funding. 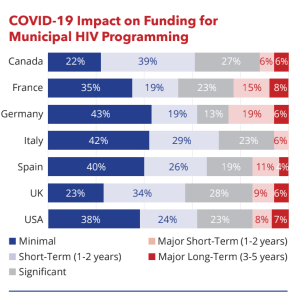 Only 35% of key informants indicated that the COVID-19 pandemic had more than a minimal impact on funding for HIV programs in their cities. Most respondents reported the impact was significant (23%) or believed it would only be a short-term impact, lasting no more than one or two years (26%). Seventeen percent of respondents said that HIV programming would feel a major short-term (1-2 years) or major long-term (3-5 years) impact at 10% and 6% in their cities, respectively. The results indicate that – even in some of the world’s most affluent nations – the COVID-19 pandemic has contributed to HIV program funding decreases with respect to HIV, at the very moment in which HIV services most need public support. On the other hand, the fact that most respondents did not feel that COVID-19 would have a major long-term impact on financing signals some optimism for the future, but as the COVID-19 pandemic continues to present new variants and challenges, this future is not yet assured. 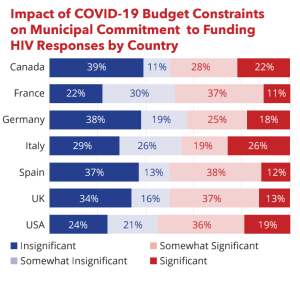 When asked about the impact of COVID-19-related budget constraints on political commitment to fund urban HIV responses, in most countries over half of respondents indicated the impact was insignificant or somewhat insignificant, with the USA being the outlier at 45%. However, it is of significant concern that almost half of respondents believe that COVID-19 has threatened the public funding they rely upon as the bedrock in ending urban HIV epidemics.

HIV responses involve a wide array of services, including those for individuals (such as testing and treatment) and those at the systemic level (such as surveillance and research). These different aspects of urban HIV responses often rely on separate funding streams, budget line items, and staffing; therefore, they stand to be differently affected by budget constraints relating to the COVID-19 pandemic. 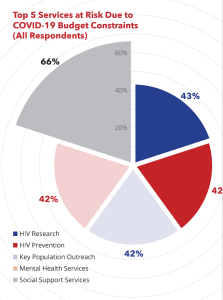 Key informants were asked to identify HIV services that they felt were most at risk as a result of constraints precipitated by the COVID-19 pandemic. Across the seven countries, respondents listed HIV research (43%), HIV prevention (42%), key population outreach (42%), mental health services (42%), and social support services (66%) as most at risk due to COVID-19 pandemic-related budget restraints. Care and treatment for those already diagnosed with HIV as well as HIV surveillance were considered less at risk of being impacted by budget changes, however, these global trends are largely driven by US responses. When looking only at responses from Montréal and the European cities, the long-term provision of social support services was identified as a significant challenge.

Overall, the results suggest that basic HIV care and treatment seem less impacted by COVID-19-related budget constraints than HIV prevention, key population outreach, mental health services, and social support services. This may reflect the conception that programs working on topics such as syndemic conditions, social determinants of health, and other non-clinical elements of HIV responses are not deemed as urgent and are thus not spending priorities during a public health emergency such as that presented by COVID-19. However, such a position would be decidedly short-sighted, particularly given what the COVID-19 pandemic has itself highlighted with respect to the importance of a holistic approach to health that includes a focus on whole health, integrated community support, and centering social determinants of health.

Due to lags in collecting, analyzing, and reporting data, it is not yet known what the precise outcome of the COVID-19 pandemic will be on HIV infection and AIDS-related death rates. Tracking the impact of COVID-19 on HIV rates is especially difficult given that testing declined significantly during the COVID-19 pandemic, meaning it may take time for testing to catch up with actual case totals. In the absence of such conclusive data, the informed opinions of key informants are made more important. 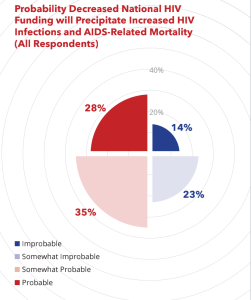 Most key informants (63%) felt it was probable or somewhat probable that national budget restraints related to the COVID-19 pandemic would lead to increased HIV infections and/or AIDS-related deaths; this number rose to more than eight in 10 when looking only in North America (81%). In contrast, only 14% of all respondents felt this scenario was entirely improbable. This alarming result suggests that national governments must immediately move to not only ensure that HIV funding does not decline, but that it also expands to adapt to new challenges and opportunities as the COVID-19 pandemic progresses. Given that national government budgets are often negotiated well in advance of taking effect, changes being made now could affect – for better or for worse – HIV outcomes in any given city or municipality for years to come.

The Fast-Track Cities initiative is built upon the idea of city multilateralism: that cities be given a seat at the global table with respect to issues such as public health, to augment (though not replace) the national health diplomacy that has typically dominated this space. Even cities with limited national support in ending their HIV epidemics have been successfully utilizing the network of peers that the Fast-Track Cities initiative provides, along with their own community resources. However, national support – both political and financial – undoubtably enhances the ability for any city or municipality to combat a public health crisis such as that presented by HIV. 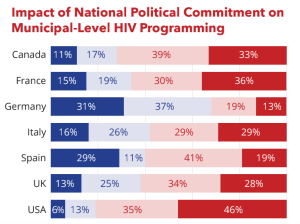 It is therefore not surprising that approximately eight in 10 global respondents said that both political and financial commitments at the level of their national governments would be significant or somewhat significant on the respective commitments made to HIV responses at the local level. In other words, key informants believe that a national political commitment to ending HIV would facilitate a similar commitment to being demonstrated at the local level, with the same being true of financial commitments. This believe was particularly strong in the cities in the North American region, although majorities in the European region indicated the same belief. Notably, less than 10% of respondents globally felt that national-level commitments would be altogether insignificant to how their locality addressed HIV. These results underscore the importance of countries seeing cities and municipalities as equal partners in the global effort to end HIV – as well as the peril that HIV advocates at the urban level encounter when faced with indifference or even hostility from national governments. 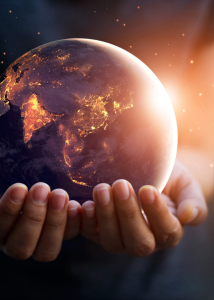 Results from the HIV Policy Barometer Survey demonstrate an urgent need to advocate for increased attention to the policy and funding dimensions of urban HIV responses as the COVID-19 pandemic enters its third year. The survey found that COVID-19 has already posed a significant disruption to HIV responses across the Fast-Track Cities where the survey was fielded, all of which are cities and municipalities where resources (when properly allocated) are more than sufficient to respond to multiple public health threats at the same time.

Additionally, funding cuts have most affected facets of HIV responses – such as integration with other social services – that could do tremendous long-term harm to communities that are already bearing the brunt of both HIV and COVID-19. The severity of the HIV policy and finance landscape led most key informants to conclude that new HIV infections and AIDS-related deaths could increase in their respective cities and municipalities because of waning political commitment and constrained budgets for urban HIV responses, in many cases, due to a retrenchment at the national level. What is clear is that key informants overwhelmingly agree that both financial and political commitments at the national level are needed to strengthen those same commitments at the local level with respect to bolstering urban HIV responses.

The COVID-19 pandemic has had a significant impact on communities living with and affected by HIV, with the true toll unlikely to be known until HIV diagnosis and AIDS-related mortality data are gathered and analyzed over the coming years. Thus, national as well as city and municipal governments must act swiftly to avoid a further loss of momentum that could result from insufficient political commitment and/or inadequate funding of HIV responses at national and municipal levels.

This HIV Policy Brief is made possible through support from Gilead Sciences.