LONDON, UNITED KINGDOM (September 9, 2019) – London Mayor Sadiq Khan today welcomed city, municipal, and global leaders to Fast-Track Cities 2019, the inaugural conference of more than 300 cities and municipalities prioritizing their responses to urban HIV, tuberculosis (TB), and viral hepatitis. Speaking at the conference, Mayor Khan highlighted the problem of health inequalities across the world, as well as the need to end the stigma still associated with HIV. He also reiterated the bold ambition for London to achieve the target of no new HIV infections, deaths, and stigma by 2030.

“I’m honoured that city and health leaders from all around the world are uniting today in London. The first international gathering of Fast-Track Cities will be a truly historic event in our fight against HIV and health inequalities,” said Mayor Khan. “I’m also proud of the work London is doing to tackle HIV and inequality, and am pleased that we will be able to share our knowledge and experience with others. But despite our progress, there is still much more to be done as too many people continue to catch the virus. To truly end all new cases of HIV in London, it’s high time the Government made PrEP available via the NHS for all those who need it. No ifs, no buts, and no more pilots – we know it works, it stops the spread of infection and saves money in the long run.”

More than half of the world’s population currently lives in urban centers where the risk of contracting HIV, TB, and hepatitis is significantly higher due to urban dynamics such as social behavior, migration, unemployment, and social and economic inequalities. However, cities and municipalities also have inherent advantages and offer important opportunities to accelerate health responses and take transformative action to ensure that equitable access to health services is available to everyone.

“We have seen that for an effective response to HIV it is critical to remove inequalities, power imbalances, marginalization, and discrimination,” said Gunilla Carlsson, Executive Director a.i., of UNAIDS, one of four core partners of the Fast-Track Cities initiative. “Cities must use their advantages to leverage innovation, create social transformation, and build equitable societies that are inclusive, responsive, resilient, and sustainable,” she added.

Organized by the International Association of Providers of AIDS Care (IAPAC), in collaboration with the Joint United Nations Programme on HIV/AIDS (UNAIDS) and other partners, the Fast-Track Cities 2019 conference is being held from September 9-11, 2019, at the Barbican Centre. The conference’s aim is to highlight successes achieved across the Fast-Track Cities network, address cross-cutting challenges faced by local stakeholders, and share best practices in accelerating urban AIDS responses, inclusive of co-infectious diseases such as TB and viral hepatitis. The conference features plenary sessions, panel discussions, and abstract presentations by representatives from more than  300 Fast-Track Cities.

“Health inequalities are preventing people living with HIV, TB, and viral hepatitis, notably from disenfranchised and minority ethnic communities, from accessing the services they need to live longer, healthier lives,” said Dr. José M. Zuniga, President/CEO of the International Association of Providers of AIDS Care (IAPAC), one of the core partners of the Fast-Track Cities initiative and the conference’s organizer. “We are convening in London because the city’s high level of political commitment, public health leadership, support from clinical and service providers, and engagement with affected communities have enabled the city to surpass the Fast-Track Cities’ programmatic HIV targets. We are here to shine a light on London’s efforts to reduce and eliminate health inequalities that contravene the principles of social justice.”

When London joined the Fast-Track Cities initiative in January 2018, the city had already met the UNAIDS 90-90-90 targets, which are defined as 90% of people living with HIV knowing their status, 90% of people who know their status accessing HIV treatment, and 90% of people accessing HIV treatment achieving viral suppression. FTC London, a pan-city group of stakeholders steering the city’s Fast-Track Cities engagement, has made outreach to the black, Asian, and minority ethnic (BAME) community a priority in their “London Getting to Zero” strategy. 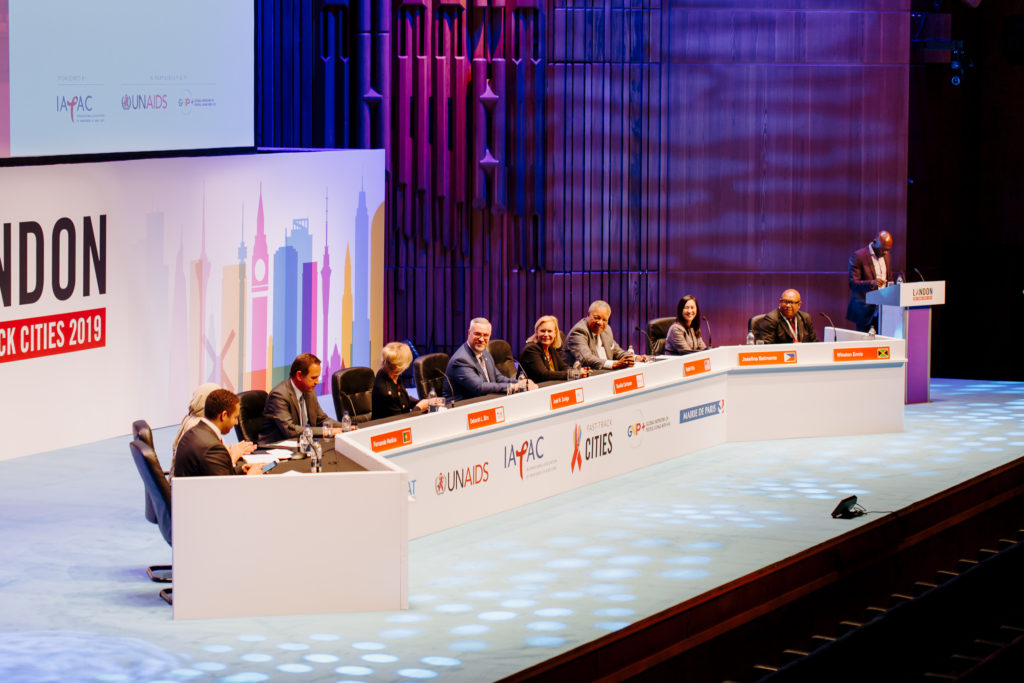 The “High-Level Panel on Health Inequalities,” which was the official opening of the Fast-Track Cities 2019 conference, included the following elected officials:

The panel was moderated by UK-based broadcaster and former BBC journalist Henry Bonsu.