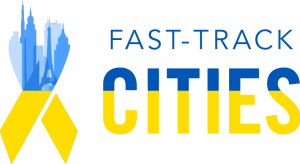 IAPAC (April 4, 2022) – Mayors from across Europe signed a Fast-Track Cities Mayors’ Declaration of Support for Ukrainian People Affected by HIV, TB, and Viral Hepatitis. As of today, 31 Mayors have signed the Mayors’ Declaration, expressing their solidarity with Ukraine’s four Fast-Track Cities and condemning “the violence the Russian Federation is inflicting upon the Ukrainian people, which runs afoul of our shared commitment to the rights outlined in the Universal Declaration of Human Rights.”

In addition, the Mayors cited their concerns regarding disruptions in HIV and other essential health services caused by the war in Ukraine. They noted that “[the] humanitarian crisis in Ukraine has defined an unprecedented need for global solidarity, both for those who remain in the country and for millions of Ukrainians who are seeking refuge abroad. This need includes the provision of medical and social services to a growing number of refugees, among them people at risk for and those living with HIV, TB, and viral hepatitis.” The Mayors concluded their declaration by pledging their “commitment to transform this declaration of support into concrete actions on behalf of our respective Fast-Track Cities and in the spirit of solidarity.

In announcing the release of the Mayors’ Declaration, Dr. José M. Zuniga, President/CEO of IAPAC and the Fast-Track Cities Institute, said that “exercising political leadership requires taking a stance when the human rights to life, liberty, and security of person are violated, as they clearly are during the unprovoked war on Ukraine. I applaud the European Fast-Track Cities Mayors who signed the Mayors’ Declaration of Support for Ukrainian People Affected by HIV, TB, and Viral Hepatitis for taking a stance and expressing their solidarity with the Ukrainian people during this humanitarian crisis, among them people living with and affected by HIV, TB, and viral hepatitis.”