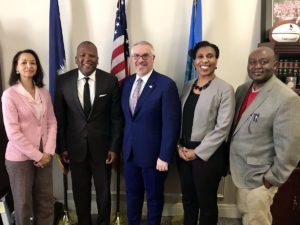 South Carolina is one of seven priority states that are being targeted alongside 48 counties, the District of Columbia, and San Juan, Puerto Rico, as part of the new national strategy to end the HIV epidemic in the United States by 2030. Federal officials are collaborating with state and local stakeholders to expand access to HIV testing, treatment, and prevention services in these areas.

“We believe that Fast-Track Cities is well-aligned with and can support the new Ending the HIV Epidemic Plan because our US efforts are focused in cities and counties – for example, Birmingham and Jefferson County, San Antonio and Bexar County, and Atlanta and Fulton County,” said Dr. Zuniga earlier this month in remarks before a meeting of the Presidential Advisory Council on HIV/AIDS (PACHA). Dr. Zuniga also discussed how Fast-Track Cities are making an impact on national-level epidemics in an op-ed for the Washington Examiner.

The meeting with Mayor Benjamin was attended by representatives from the South Carolina Department of Health and Environmental Control and ViiV Healthcare. Participants discussed strategies for accelerating local action on HIV, and extending the Fast-Track Cities network to more municipalities in South Carolina and the southern United States. Mayor Benjamin currently serves as the President of the United States Conference of Mayors.

“We can save lives by working together,” said Mayor Benjamin about the meeting. He also emphasized the importance of taking a data-driven approach in local efforts to end HIV transmission.