Columbia, South Carolina, became the 22nd municipality in the United States to join the global Fast-Track Cities initiative today (February 5, 2019), linking the city’s urban AIDS response with the work of hundreds of other cities around the world. Mayor Steve Benjamin signed the Paris Declaration on Fast-Track Cities this evening at Columbia’s City Hall. 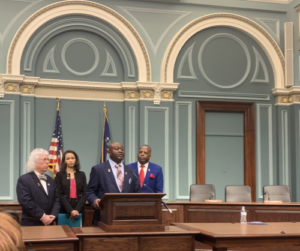 “The Paris Declaration highlights simple yet incredibly effective measures and practices that will allow us to achieve our goals as a city,” said Mayor Benjamin. “We look forward to playing a role in bettering the lives of our residents and improving the health outcomes of this community.”

The City of Columbia’s announcement coincides with National Black HIV/AIDS Awareness Day. This annual event calls attention to the ongoing disproportionate impact of the HIV epidemic among Black people. According to the US Centers for Disease Control and Prevention (CDC), African Americans represented 43% of new HIV diagnoses in 2017, despite the fact that they comprise roughly 13% of the national population. Among Black men living with HIV, 80% of them acquired HIV through same-gender sexual contact. Among Black women who have HIV, 91% became HIV positive through heterosexual contact. Although the CDC estimates that 85% of African Americans who have HIV are aware of their status, only 46% have achieved viral suppression (the ultimate goal of treatment with antiretroviral therapy to achieve therapeutic and preventative (undetectable equals untransmittable [U=U]) benefits.

“IAPAC welcomes Columbia to the global network of Fast-Track Cities committed to accelerating their local AIDS responses and placing affected communities at the center of efforts to get more people tested and linked to prevention and treatment services, as well as addressing barriers such as stigma related to HIV, mental health, and substance use,” said Dr. José M. Zuniga, President/CEO of the International Association of Providers of AIDS Care (IAPAC), the core technical partner of the global Fast-Track Cities initiative. “By focusing our efforts in cities with high HIV rates across the United States, the Fast-Track Cities initiative will save and enhance the lives of people living with and affected by HIV, and contribute to the national goal of ending the domestic HIV epidemic by 2030.”

South Carolina is one of seven priority states that are highlighted alongside 48 counties in the new federal HIV policy that was announced by President Trump during his State of the Union address this week. The southern US is the region that is the most heavily-affected by HIV in the United States. HIV testing is critically important in southern US states, because this region has the lowest number of people living with HIV who are aware of their status. As a result, fewer southerners living with HIV are able to receive the treatment they need to reduce their viral loads, avoid disease progression, and avoid transmitting HIV to others.

More than 250 Fast-Track Cities worldwide have committed to achieving the Joint United Nations Programme on HIV/AIDS (UNAIDS) 90-90-90 targets. These targets seek to ensure that 90% of people living with HIV know their status, that 90% of people who know they are HIV-positive are receiving antiretroviral therapy, and that 90% of those on antiretroviral therapy maintain viral suppression. Achieving zero stigma is an additional Fast-Track Cities goal.